Feeling immensely unsatisfied after one day in Kyoto, We decided not to let go and made a second attempt. This time the conditions were more favorable and we also managed to reach the Nara. And all this in one day.

In the morning we were awakened by the sun, so taking advantage of the beautifully promising day and cloudless sky, we changed our plan for the day. We quickly gathered up and ran to Kyoto Station to once again use our JR Pass and go first to the south of Kyoto, and then ultimately to the town of Nara.

We were interested in the JR Nara Line (JR Nara Line), which runs every now and then between Kyoto and Nara, stopping along the way at other places attractive to visitors. We were mainly interested in Nara, so after the first stop in the south of Kyoto, we drove directly to Nara.

The aforementioned stop in Kyoto is a must-see, one of the most picturesque and most photographed places in Kyoto and even in all of Japan. We were talking about the mile-long torii gate paths that are located on the grounds of the shrine Fushimi Inari (jap. Fushimi Inari Taisha), built for the gods of rice and sake. To reach the chram, take the mentioned JR Nara line and get off at Inari station – continue walking with the crowd 😉

Unfortunately, when we arrived the weather was no longer so kind, but recalling our last tour of Kyoto in the rain, it was still much better. 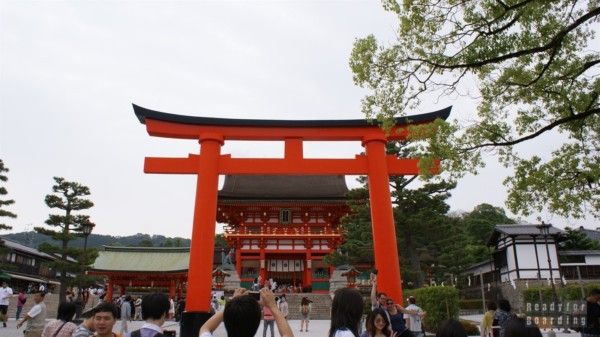 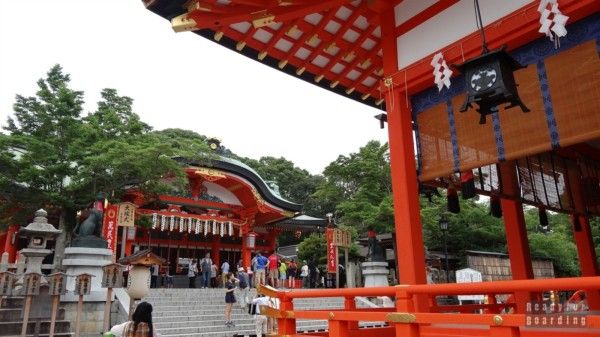 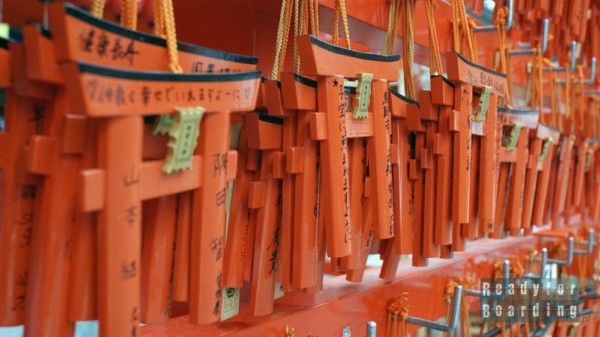 Arriving at the chram, the first thing that catches the eye is the traditional orange and red torii gate and behind it other buildings maintained, of course, in the same color scheme. After passing under the gate, we found ourselves on the deity's grounds.

Chram is mainly famous for the aforementioned, about 4 kilometers long uphill road with thousands of torii gates. The inscriptions on the torii designate the founders of each specific gate (they can be either companies or individuals). For those interested, prices for such named gates start at approx. 400,000 yen, and end up with more than a million (don't look for ours there, you won't find it 😛 ).

To reach this path, go behind the main buildings of the shrine, towards the hill. The road leads among the forest to the sacred mountain of Inari (233 meters), and the whole route takes more than 2 hours. Along the way you pass other smaller sites, shrines and numerous fox statues. 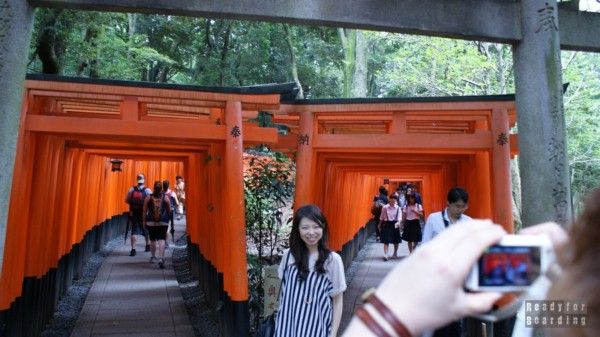 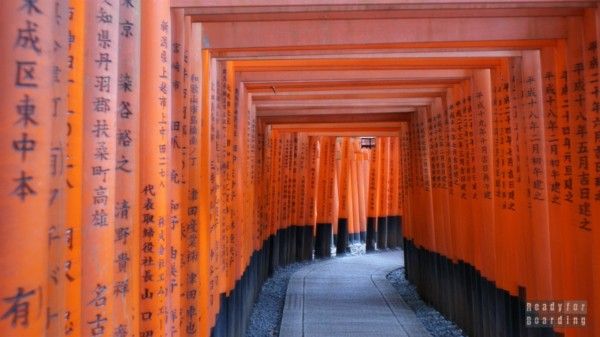 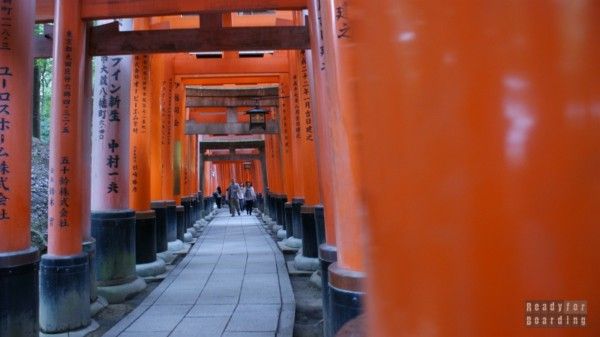 As you can see from the photos it was not so crowded. At first we passed a lot of people, but the farther we got the looser it got – many people just walked up to the entrance, walked a few dozen meters and turned back. Similarly, there was a question of the density of the distribution of the gates – at first they are placed close together, one behind the other, but the farther you go the greater the distances are.

After this must-see point on the Kyoto map, we nimbly set off towards the train station to reach the aforementioned town – Nara. The city was Japan's first permanent capital and is designated as the second (after Kyoto) in terms of cultural heritage.

Here, too, were waiting for us our good friends – the fallow deer (so familiar to us from Miyajima Island), which have already become an invariable part of Nara's landscape. They welcome and eagerly approach people heading to the most important temple in the city – the Todaiji. Their interest is not disinterested, well, they are very much hoping for small treats from incoming visitors. You have nothing to eat? That's okay, because almost at every turn there are small stalls waiting for you, where you can buy food for 150 yen.

Anyway, it's not only these charming creatures that are happy to see tourists. Selling souvenirs, gadgets is quite a profitable activity here from what we observed. 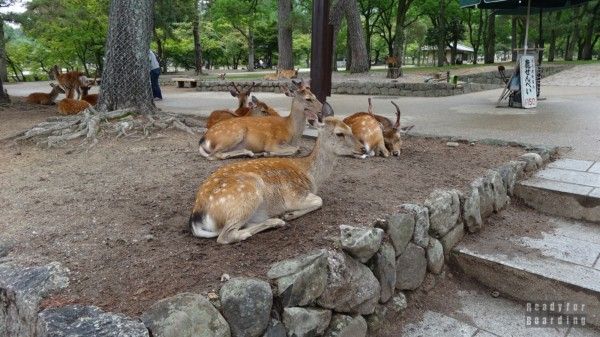 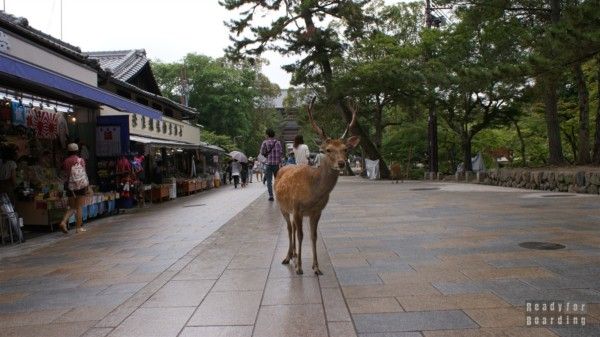 A must-see in Nara is the aforementioned temple Todaiji, More specifically, the entire complex of temples including the monastery. It was built in 752 and at one time became the main and most influential Buddhist temple in Japan.

The entrance to the temple is through a monumental wooden gate Nandaimon. More than 25 meters high and 29 meters wide gives you a foretaste of what awaits you once you cross it. The gate houses the temple guards – two menacing-looking statues, but they are not currently visible from the front, only from inside the gate. 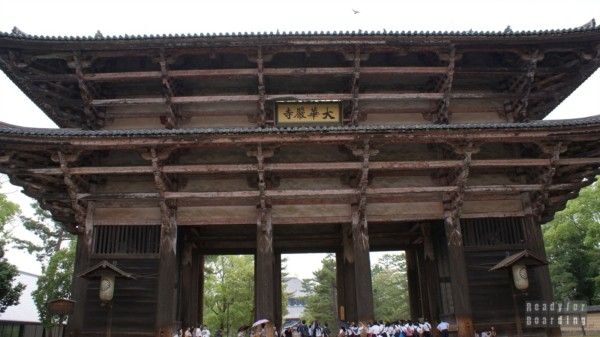 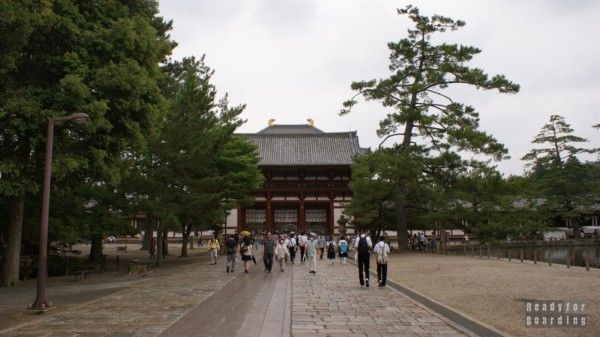 After crossing the gate and walking about 250 meters, we arrived at another gate, behind which we were shown the Great Buddha Pavilion (jap. Daibutsuden). Not only is the Great Buddha a huge pavilion, as the building itself is considered one of the largest wooden buildings in the world. 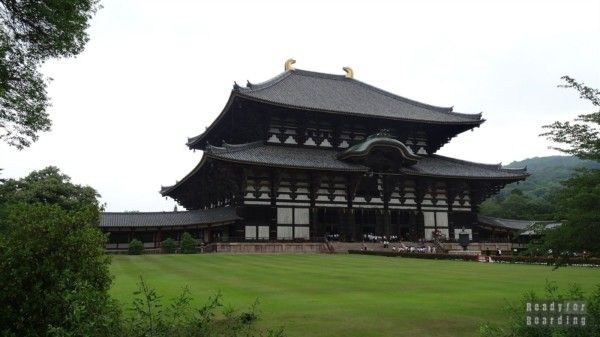 What's more, the bronze Buddha statue inside is one of the largest statues of its kind (16m tall, although some sources say "only" 15m). 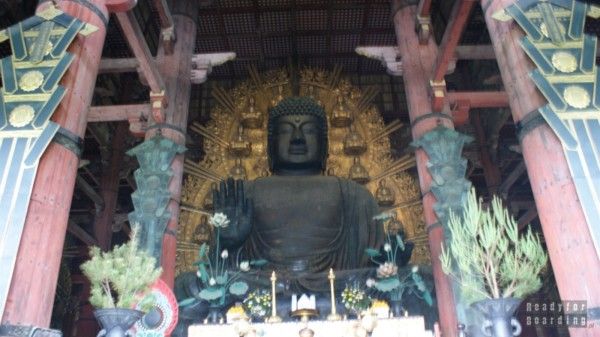 In addition to the Great Buddha Pavilion, there are many other smaller buildings in and around the complex, such as the Nigatsudo Pavilion, Todaiji Museum, Nara National Museum, Hokkedo Pavilion. In addition, many can be reached by paths Nara Park, Where, of course, we are accompanied by fallow deer. 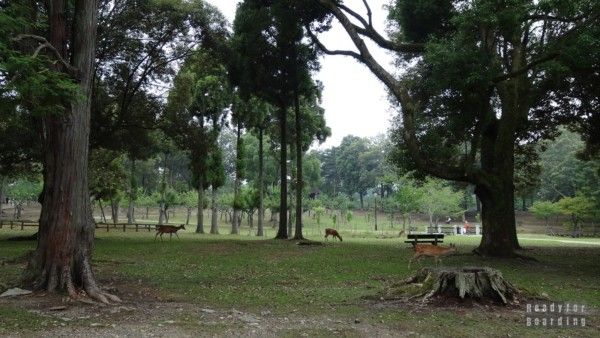 After feeding the animals, we got hungry ourselves. After a few days of experimenting with Japanese cuisine, we decided to see what the local McDonald's had on offer. Of course, the menu includes teriyaki burgers, but also more traditional and familiar sandwiches. Unfortunately, they do not in any way compare to the local "burger shops" about which in future posts… 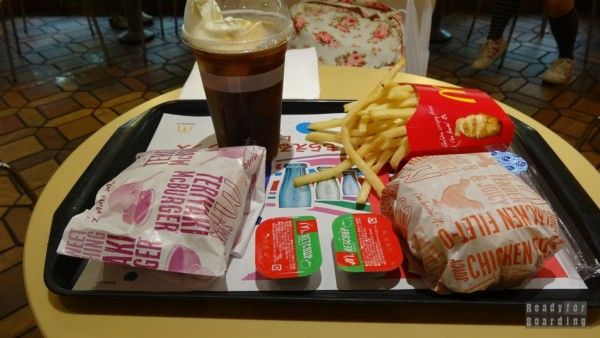 Then, after replenishing the necessary calories, we returned to Kyoto, where there were still plenty of places to explore waiting for us.

It was time to visit the western part of Kyoto, more specifically the district of Arashiyama. Something that interested us most in this area was the bamboo forest, But that's not the only thing worth seeing. This district can be reached by rail, line JR Sagano.

Of course, the first thing we did was head towards the famous bamboos. It was getting late, so there were few people, and we were able to walk leisurely and poke our heads high, high up. 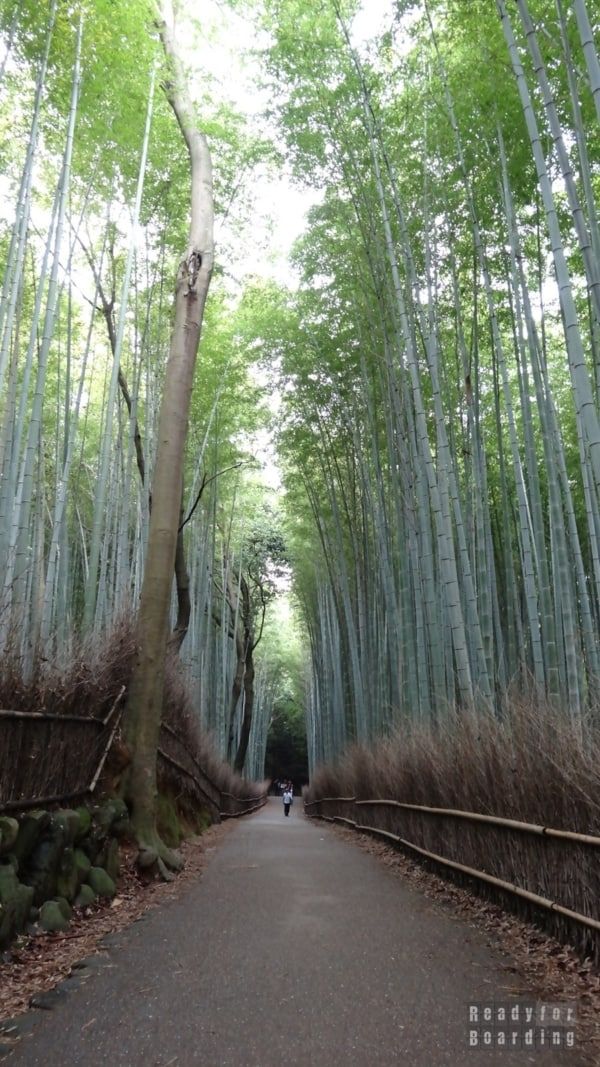 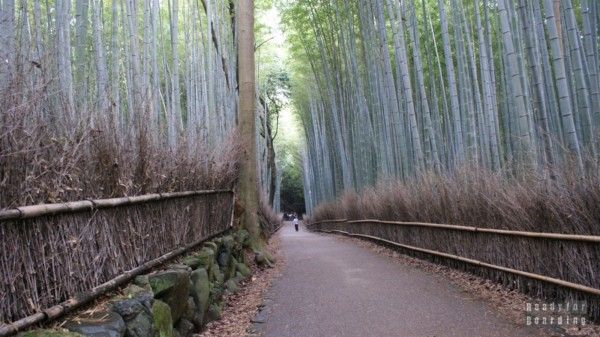 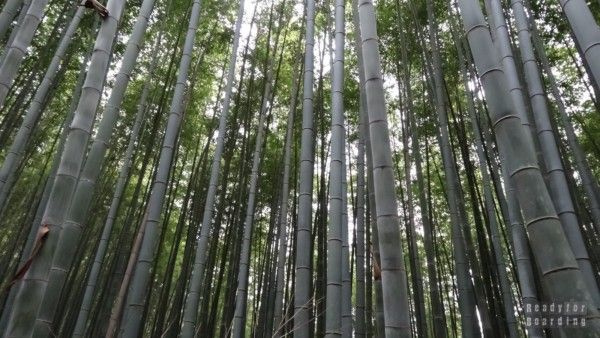 Our standard is jumping pictures. Such and here could not be missing 😉 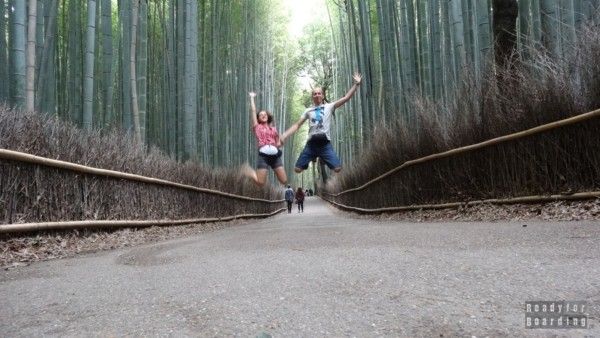 As we mentioned, there is much more to see in Arashiyama itself. Recommended by the guidebook was also Tenryuji temple Or the park with monkeys Iwatayama. However, we were already there in the evening and the attractions were already closed.

However, there are places that do not have opening hours such as the bridge of Togetsukyo (A very famous bridge built over 1000 years ago!) and historic street Saga-Toriimoto (A nice, typically Japanese street with low buildings). This is a place where time passes more slowly, people walk more quietly, there is a lot of greenery, and the surrounding wooded hills mark the natural boundaries of the city. 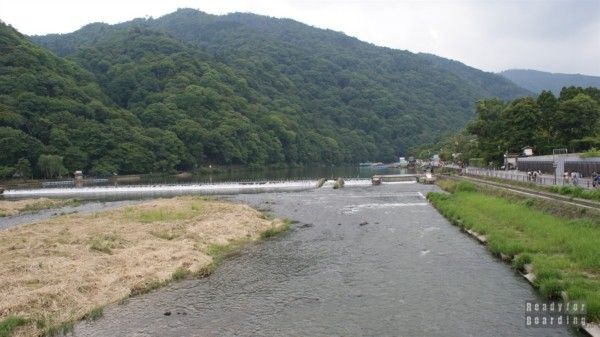 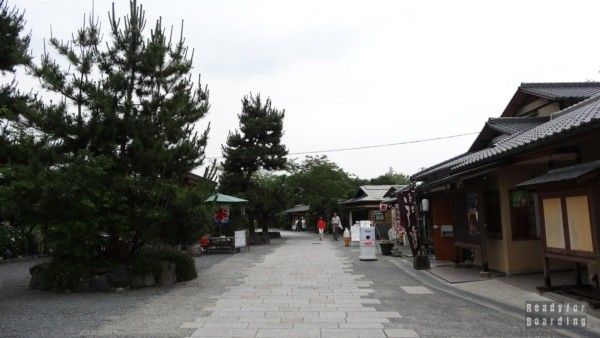 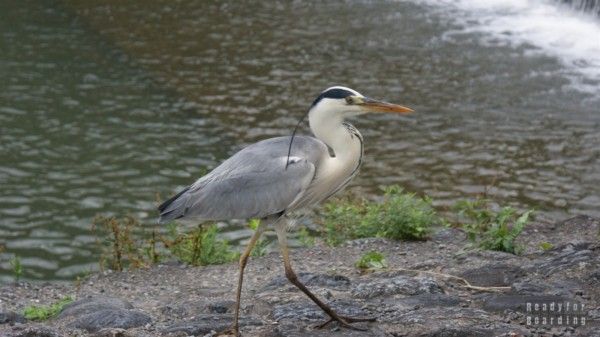 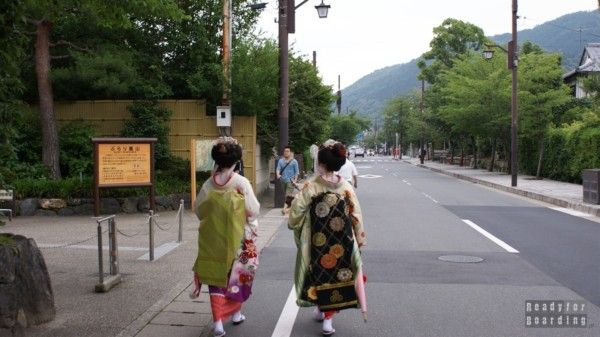 That concludes our sightseeing in Kyoto, and with that, we started packing, as the next leg of the trip lies ahead of us.

As we reminisced about Kyoto? A city of temples, chrams, traditional low-rise buildings, culture and history. In Kyoto you can see it at a glance. In Tokyo, modern skyscrapers come to the forefront, expanded roads, new technology at every turn. It is the contrast between these cities that makes it necessary to see them both.