Kyoto (Kyoto) is a city with traditions, temples, chrams, the destination of almost all trips to Japan. It is said that being in Japan and not seeing Kyoto is like being in Poland and not seeing Krakow.

So we devoted the day entirely to exploring the former capital of Japan. A very long day… seriously!

To start with, we went to Kyoto train station, Where you can buy an all-day ticket for buses or buses plus the subway. We went straight to the tourist information to pick up some maps, leaflets and ask about the most interesting places. If you have a moment, it's worth going to the terrace located at the train station – you can see the city skyline (the terrace is free). 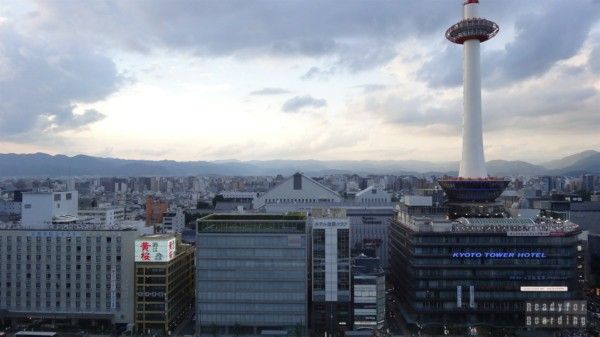 As for public transportation, the subway itself is not very extensive, but there is a. It should be noted here that there are only two subway lines in Kyoto: north-south and east-west. For tourists, the city has set up special bus lines that run between the city's major attractions – a huge plus for that! Before pulling up to the bus stop, we could listen in Japanese, English and one language closer to us unidentified (Korean?) description of the attraction we were approaching.

Interestingly, the buses are boarded through the back door, and only at the exit did we pay our fare or show our ticket. Nowhere so far have we encountered such a mechanism – well, full confidence in the public and also you have time to deduct change or find a ticket. 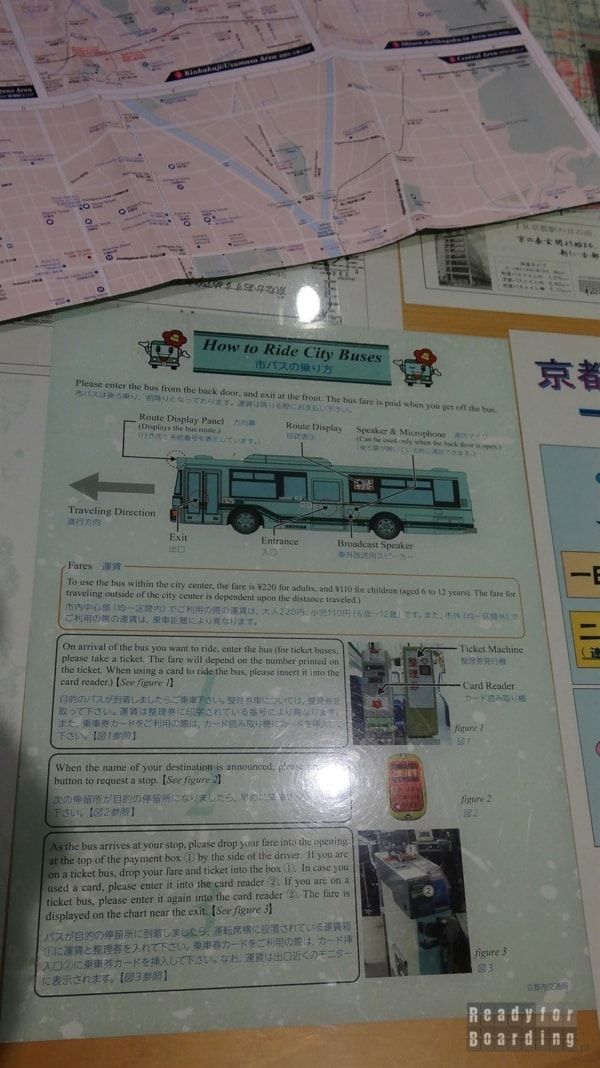 Unfortunately, it was gathering rain from early morning and the weather made it very difficult for us to visit the city. After a rainy day in Kamakura and Yokohama, we hoped to see the most beautiful places in Kyoto in the sunshine, but we counted.

In Japan, during the rain, there is no such thing as a rain jacket in operation – everyone walks exclusively with umbrellas, and in front of every store or restaurant you will find stands where you can leave them (and even plastic bags for umbrellas). We (unfortunately) moved around in rain jackets. Convenient, but "uncultured", because thanks to the fact that they leave umbrellas outside you do not go inside wet. We, unfortunately, brought some water and sometimes people steamed at us strangely… But to the point…

We took our first steps to the most famous place in Kyoto viz Golden Pavilion (Kinkakuji). There is an entrance fee, of course, but it's really worth it!

The eponymous building is a Zen temple covered with gold flakes that make the building shimmer beautifully. The very location of the temple deserves attention: right on the Kyōko-chi pond, in which the entire building is reflected, surrounded by greenery from all sides. Originally, it was the villa of shōgun Ashikaga Yoshimitsu, later renamed a temple. Destroyed several times and even set on fire by a young monk – finally rebuilt in 1955.

Beautiful building, well-maintained gardens – it's worth a walk to the hill overlooking the city. What caught our attention was a marked tree standing in the distance, which survived or was exposed to radioactivity after the Hiroshima attack. We don't know exactly how it was possible that only one was marked, but there must have been something in it. 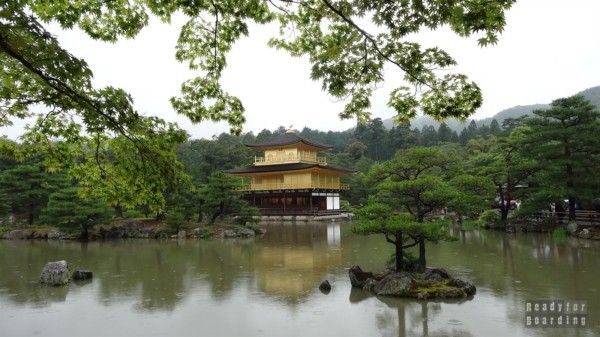 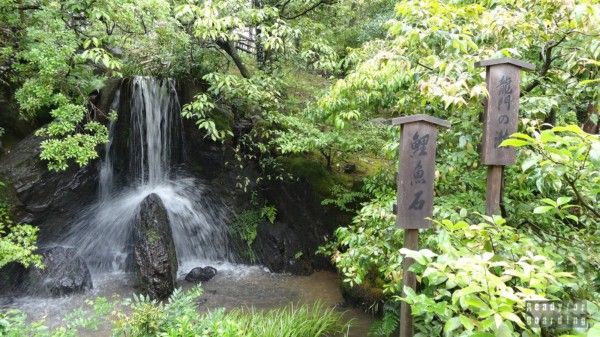 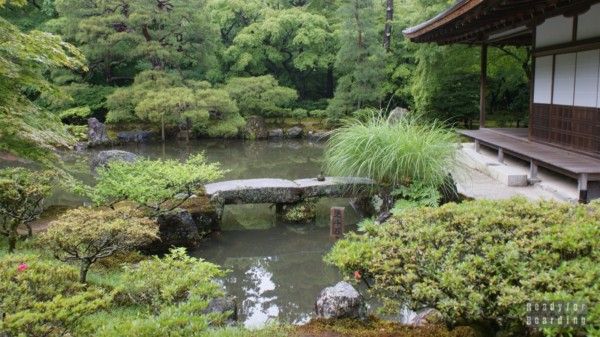 Ginkakuji is another Buddhist temple, originally the villa of shōgun Ashikaga Yoshimasa (not to be confused with the one from the Golden Pavilion!). Contrary to its name, you won't see a silver-covered building here, because the shōgun didn't manage to complete the villa in his lifetime.

Like the Golden Pavilion there is also a pond, well-kept gardens, although in the case of the Silver Pavilion the garden seems more manicured, there are more flowers, and in places there are cones made of sand symbolizing a mountain and a lake (sand garden). 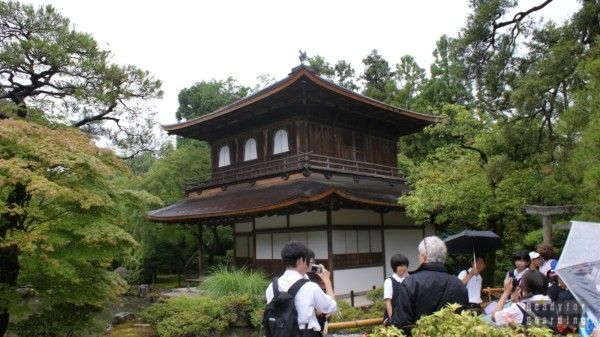 Kyoto has a real glut of temples and chrams. One could spend a week here and still not have a chance to see everything. We managed to see a few more sites that day, in the eastern part of Kyoto, which we write about below.

Heian chram (Heian-jingū) – A relatively young shrine, as it is slightly more than 100 years old, built on the 1100th anniversary of the founding of Kyoto. The building and square are impressive in size and unused space. Only outside the square is a little less overwhelming – there is a garden, a pond (where turtles are said to swim), a bridge and lots of greenery. The orange, tall torii gate that forms the main entrance to the temple is on the street, some half a kilometer away from the shrine buildings themselves. 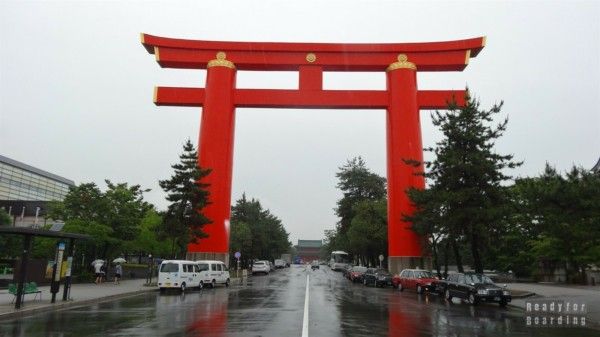 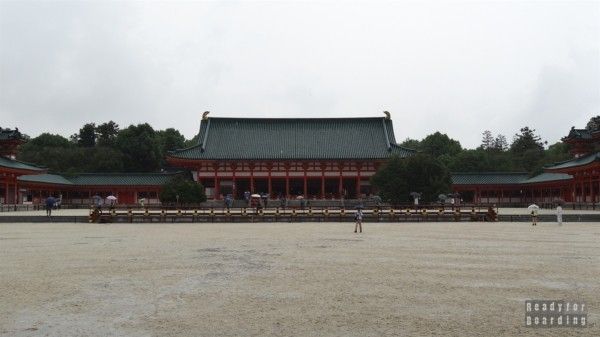 Chion-in Temple – is the headquarters of one of the factions (or sect, if you prefer) of Buddhism: Jodo. The temple is famous for its large wooden gate – San-mon, which is the largest gate in Japan. 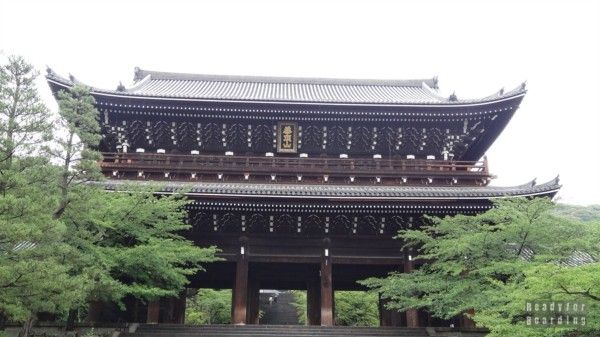 Temple Nanzenji – also at this temple (monastery) you can see the impressive San-mon wooden gate. Initially, the villa of Emperor Kameyama was here, then a temple was erected, and later the whole thing was changed to Rinzai Monastery. Especially noteworthy is the garden at the back of the temple.

Yasaka Chram – One of the most popular chrams in Kyoto. Something that catches one's eye right away are the red wooden tori, but also the red trim on buildings, fences and even lanterns. There are a lot of lanterns hanging here, their number even gives the impression that a few more and the structure that holds them will collapse soon. Each has the name of the founder (the company that supports the chram) written on it). Yasaka Chram is also called Gion, after the neighborhood that is right next door (about which two paragraphs below). 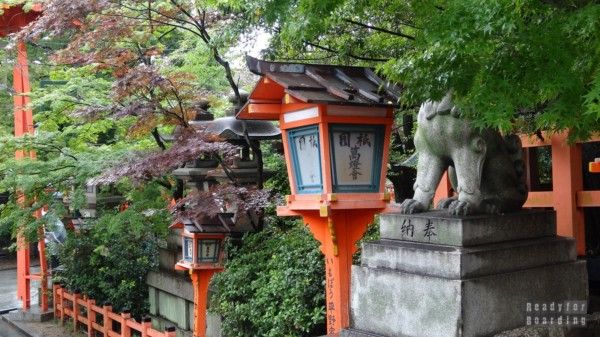 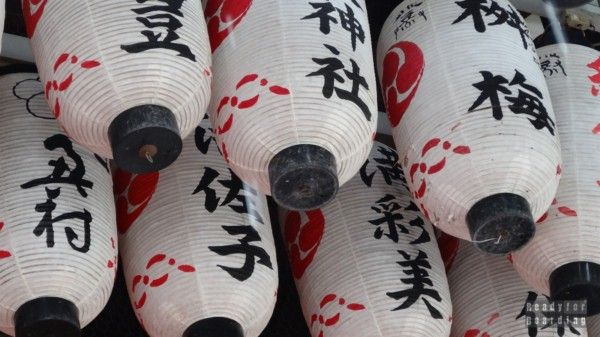 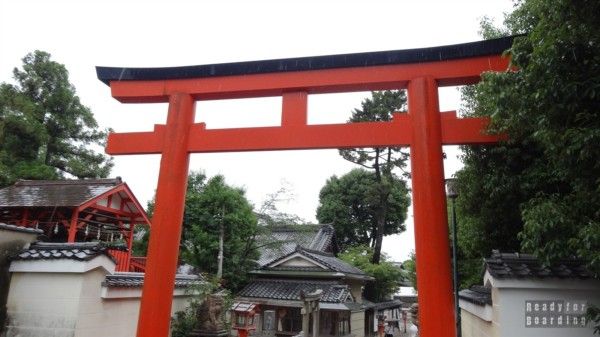 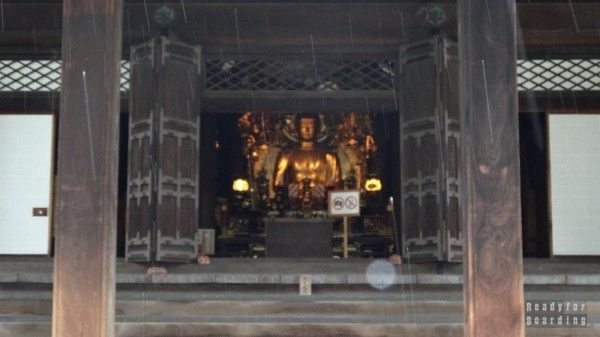 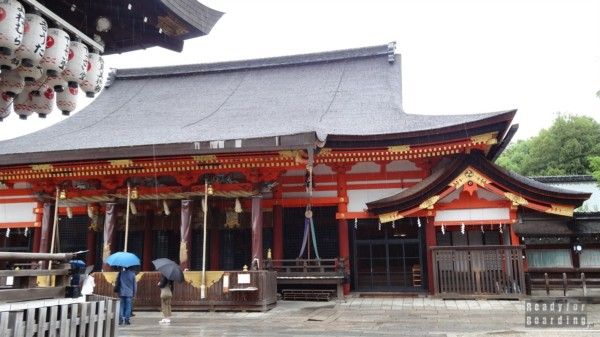 We saw many temples and chrams. Maybe even too much, because at a certain point they began to blend into one… All of them are beautiful and worth recommending, however, by the next temple you can already confuse which you have seen before. Maybe it's a matter of such a different and unfamiliar religion and culture for us.

Unfortunately, during our tour of Kyoto's sacred sites, we didn't have much luck, as the rain kept hammering, which took away some of the fun. We didn't smell the incense smoke, we didn't see Japanese people praying, the atmosphere wasn't the same anymore.

However, we did not lose hope. Or maybe we just felt bad for the day to go back and sit in the hotel? We set off in the direction of Gion in search of the truest geisha (although in Kyoto is more correct: geiko).

Gion is on the one hand a modern and on the other an old and historic district. More importantly, however, the district is famous for its geishas, who are easy to meet on the street, and even easier to meet in restaurants or in the so-called "geisha shops. teahouses. We, again, were sort of less fortunate – we saw only a few Geisha on the streets (perhaps due to the rainy weather).

The most famous street is Hanami-koji, where there are buildings dating back to the 17th century, including especially wooden buildings machiya.

If you will be at the time of cherry blossom then be sure to go to Shirakawa-minami Dori, one of Japan's most beautiful streets. We can only imagine how magical it is here when the trees are in bloom. 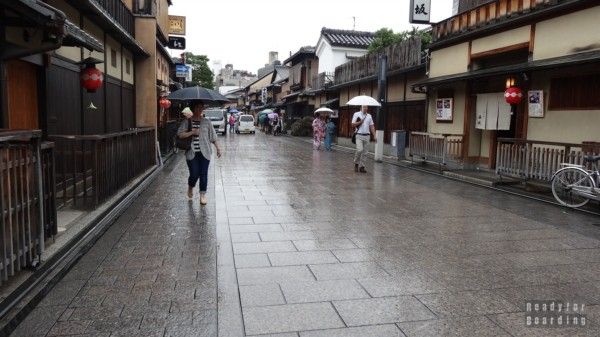 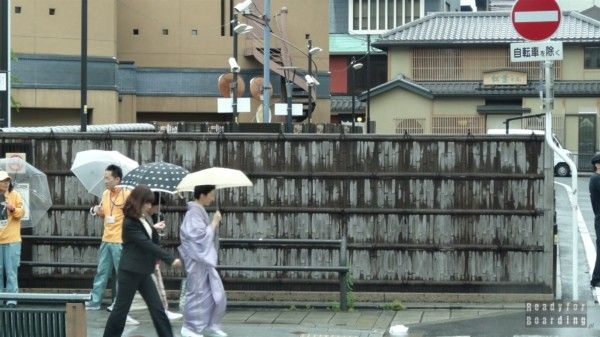 Yes, we are monothematic in our coverage of this day, but what to do when two wanderers from Europe come to one of Japan's most beautiful cities and can't enjoy it 😉 Soaked and tired we went to the Nishiki Market (Nishiki Ichiba), Which is an excellent shelter from the rain. Finally there was hope to dry off a bit and warm up.

This is a downtown market with over 100 stores and restaurants. You can get a lot of more or less famous food items here, lots of seafood (including small octopus stuffed on sticks like lollipops) and strange Japanese ingredients/spices. Most of the rarities sold here we did not know and had never seen with our eyes before. We weren't brave enough to try everything either, but we couldn't take our eyes off the baskets and containers full of exotic delicacies. At the market, of course, you can also buy various souvenirs, gadgets, clothes, although food definitely dominates. 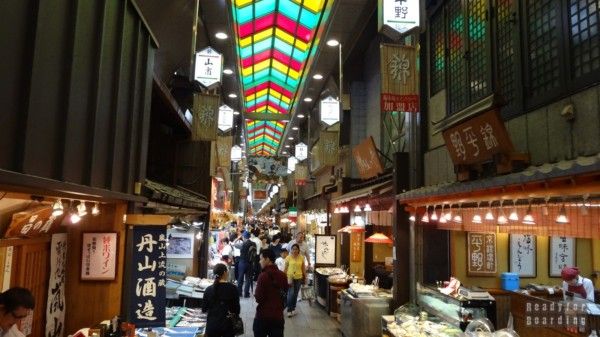 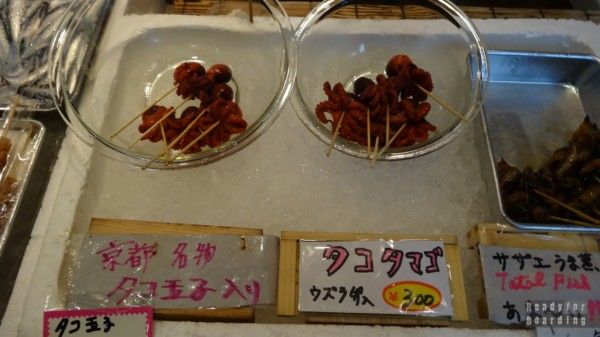 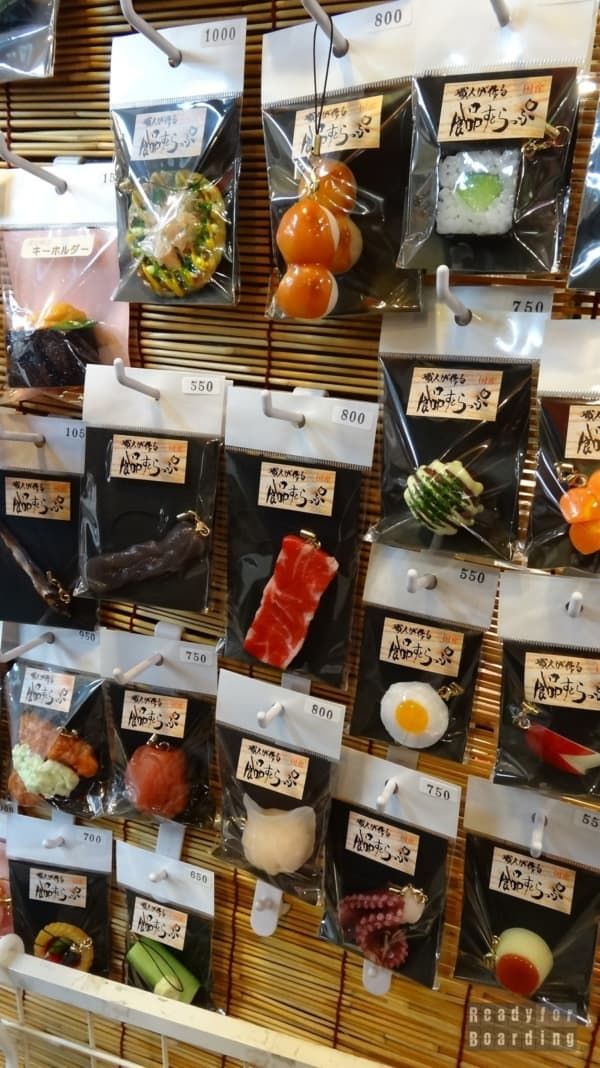 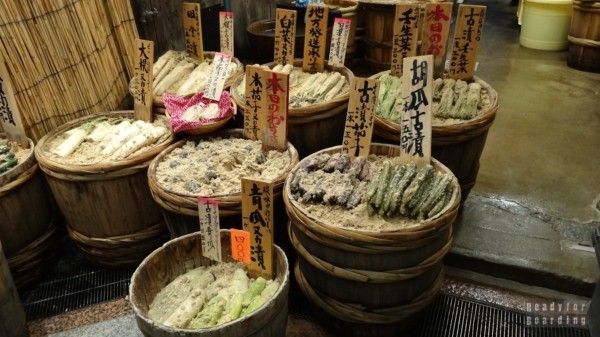 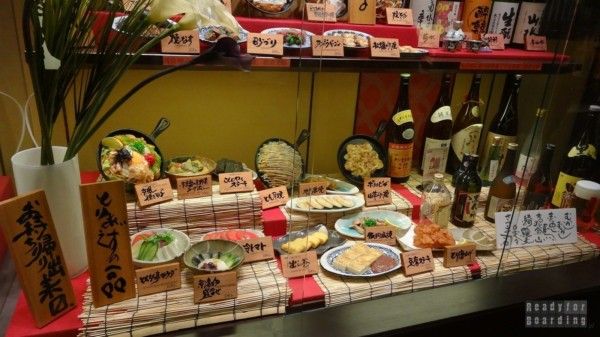 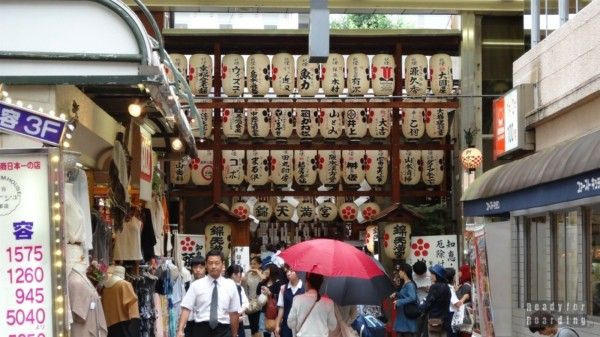 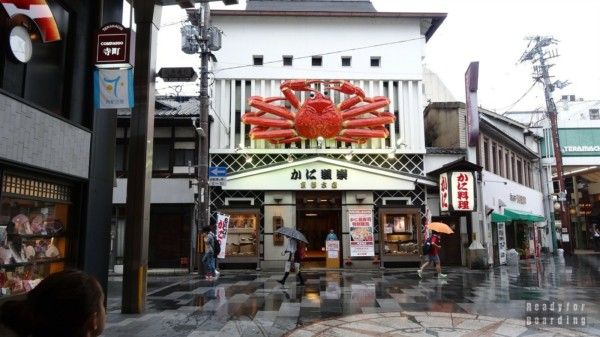 The mixture of smells, crowds of people and the prevailing bustle are characteristic of this place. At times it was difficult to squeeze from one stall to another – you can see the market even on the other side of the world is governed by the same laws 🙂

After a short walk, we walked to a pub recommended by our guide: Ippudo. We just happened to be at lunchtime, so the price of soup still included Japanese dumplings, rice and of course tea. 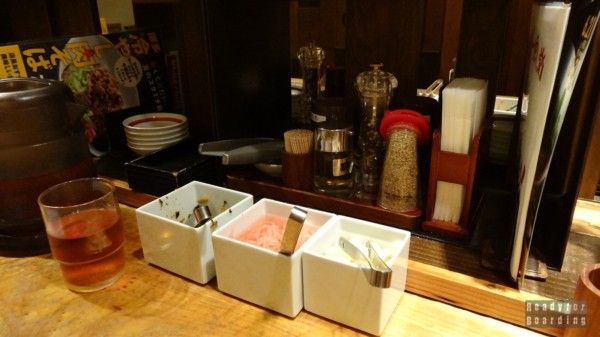 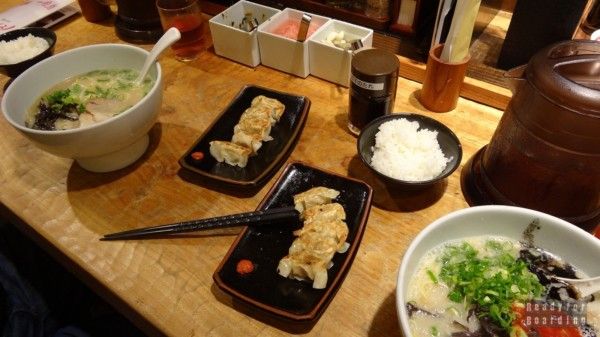 An additional attraction was the locals sitting next to us, who very ostentatiously were clinking and slurping while eating the soup – I mean the guys liked it 🙂 This is completely normal behavior in Japanese culture. Unfortunately, the other tourists sitting next to us didn't seem to like it, because they quickly left the restaurant.

After the meal, we went to The Imperial Palace (Kyōto Gosho), Which is located in the sprawling, rectangular-shaped Imperial Park. This large, green area in the center of the city is immediately striking when looking at a map of Kyoto.

The park was empty (which we understand due to the increasing rain), so we traversed the wide park avenues alone, and finally kissed the handle of the gate to the palace. Unfortunately when we arrived the facility was already closed, so we had no chance to see the imperial buildings. The only thing we learned was that, to get inside, you have to sign up in advance at a building nearby – this is the only option to enter the Imperial Palace grounds. 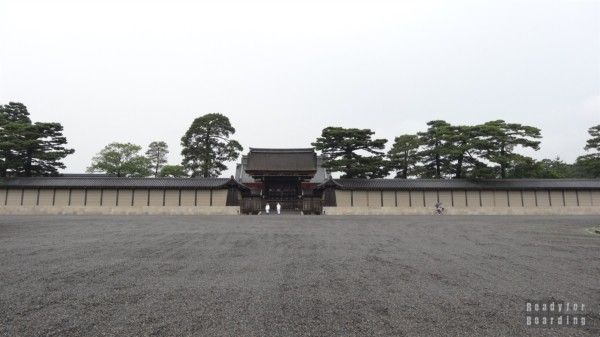 We decided to end our sightseeing in Kyoto for today at this point. It was a very long and tiring day. Probably even one of the longest during our entire trip. Despite the adversity, we tried to get as much out of the day as possible, but on our way back to the hotel we were glad that we were staying here longer, because we might still be able to see Kyoto in more favorable conditions. 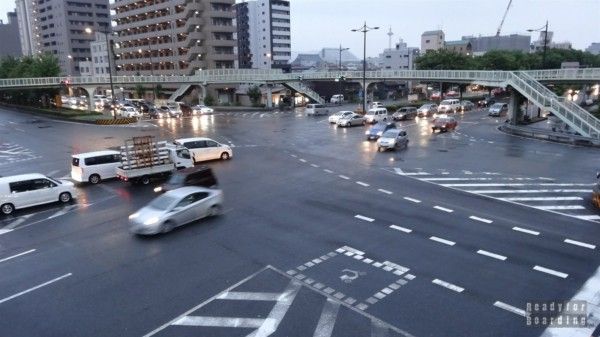 Still, perhaps due to the weather, we missed the "wow effect". Apart from the temples, which are indeed impressive (if only by their number), the city is gray, bland, less developed than Tokyo. This is probably due to the fact that two days earlier we were in the noisy, colorful capital, and here there is more peace and quiet, the ads do not dazzle so much and also there is no problem with crowds on the street. Different city, different climate. For the time being we were more comfortable with the Tokyo one.

This by no means means means that Kyoto should be crossed off the list of cities to see in Japan. Worth! If only for these temples, chrams, palaces as well as villages not far from Kyoto, which we write about in subsequent posts.

We invite you to see more photos in the gallery, of course: