Just as Cubans deserve ice cream so Icelanders deserve hot pools! We can find them almost everywhere. In any, even a small town. You can read about the rules, conditions, prices and pool savoir vivre in this post 🙂

If a few days before leaving for Iceland, someone had told me that I would be flying outside in a bathing suit when it is below 0 degrees, I would have laughed at him … me, a person who tolerates only temperatures above 20 degrees … and yet it worked out 🙂

No matter what the air temperature was, whether it was raining or windy, we took advantage whenever we could of the hot-water pools, which were always in the resorts where we stayed overnight.

How to behave at a swimming pool in Iceland?

Using the city's pools can be quite a challenge, as you have to cast aside our Polish habits, get used to the sight of naked people in the locker room and showers (for some unthinkable!), well, and get used to a little warmer water. That's all Iceland in a short summary 🙂

Fortunately, we were accompanied by a friendly Icelandic resident on our first attempt, so she introduced us to the whole ritual and rules of the pools. This allowed us to find our way around each other fairly easily 🙂

Speaking of swimming pools, it should be noted right away that the Blue Lagoon, described by us, is governed by slightly different laws – there everything is made for tourists. Icelanders as scarce. And also the price is typically for tourists. It's worth a go, to see, however, today we will focus on the usual city pools, which are not described in guidebooks. 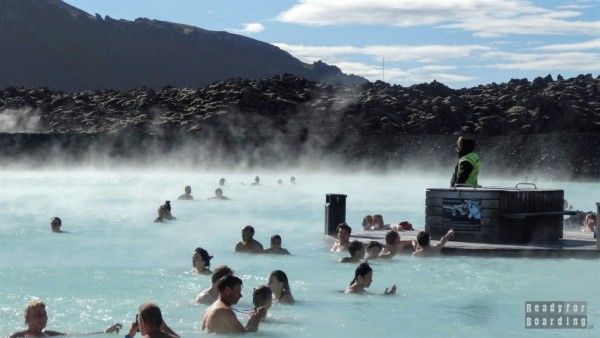 As I mentioned at the beginning, in almost every town you will find a municipal swimming pool, where there are usually a few small pools with warm water (about 37-42 degrees), a swimming pool (colder water), a bathtub with ice water (as if someone was hot), a sauna and often there were two-three slides (not necessarily for the youngest).

Pools are relatively inexpensive, very clean, well-maintained – we have been to both old and brand new facilities. It is known that in the new ones everything is up to scratch, but even in the older ones you will not have a problem with a non-working shower or hair dryer. 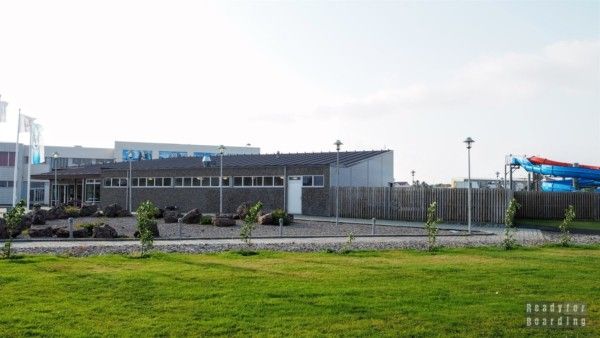 In addition, these facilities are open for quite a long time, so they are a super option for warming up and bathing in decent conditions when, for example, you spend the night in a tent. We also used the pool several times in the morning, even before breakfast – we were completely alone in the entire facility.

As for prices, of course, it depends on the specific facility. On average we paid about 500 kroner (3-4 eur). Of course, lockers are already included in the price, and the time is unlimited (although it is – the pool closing time ;-)).

In general, there is nothing to count on spending the whole day here – this is not the type of attraction where you come with sandwiches, a drink and a book to read. We spent a maximum of one hour at the pool.

Rules at swimming pools in Iceland

But moving on to the specifics and the rules that should be followed, first of all, remember that these are not usually swimming pools where you can slip into a bathing suit on the run 😉 Here, going to the pool is a veritable ritual, and below are some valuable tips on how not to commit a faux pas:

1. Shoes and outer garments leave in front of the entrance to the locker room – there is no locker room where you get a number, there are just separate areas with benches where everyone leaves their jackets and shoes. As it happens 😉

2. Locker rooms are not coeducational – always women one way, men the other way. Never the other way around 😉

3. Icelanders do not use pool shoes. It is not forbidden to enter in flip-flops, I could not get violent and, at least in the locker room, I walked around in flip-flops anyway. Paul, on the other hand, had no resistance. I later, after showering, left in one place and ran around the pool itself already without shoes.

4. A shower is very important! Before the pool, you need to wash your whole body thoroughly (head too), without a swimsuit or swimwear. Do-cla-dnie!

This is not some unfounded invention – it's just that pools have much less chlorine and it's a way to keep the water clean. As if anyone had doubts, there are even instructions before entering how and which parts of the body should be washed very thoroughly. 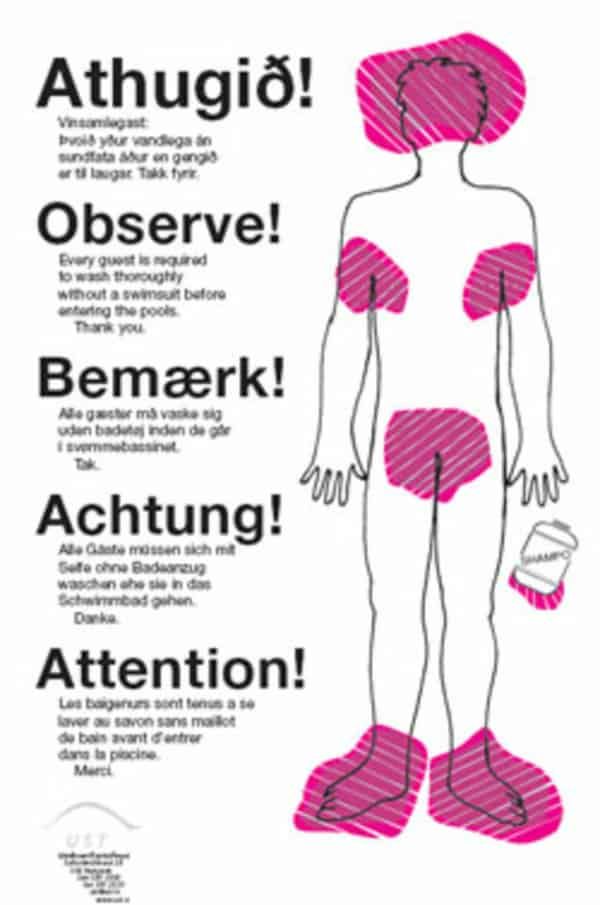 Ignorance of Icelandic is no excuse! There are pictorial instructions, and several times we even encountered information in Polish (filthy! :P).

Showers, as a rule, are not fenced off or curtained individually, also some people will probably find it difficult to wade through (the exception is Blue Lagoon, where, in addition to separate cubicles, even shower toiletries are available).

5. Icelanders are not embarrassed nudity! They walk around the locker rooms naked and do not drape towels over themselves. Mothers with children, groups of teenage girls, all naked. Without any restraint, they move slowly, dry off and get dressed. Showering also naked and everyone follows the order to bathe thoroughly.

6. Towels are left at the showers, where there are designated places – remember where you leave yours, especially if you have a white one 😉 They are no longer needed at the pool itself.

7. In the locker rooms there is quite a few amenities, We've encountered baby bathtubs and toys, clothes baskets, there are always hair dryers, often even bathing suit dryers.

8. Once we've washed up it's time to use the pools, which have different temperatures (Up to 42 degrees C) and use them judiciously (the warmer it is, the shorter you should sit in the water). The pools are marked, and there is also information before the entrance about who should not use the warmest ones.

9. In the hot pools we do not swim 🙂 First of all, they are generally so small that you can't get in. Secondly, in such warm water from swimming anyway nothing. The hot pools have seating areas, some also have massages. It is a place of rest, relaxation.

10. At the pools, nor in the locker rooms We do not use cameras or cell phones. At the pool itself we could probably even manage to bring a phone, but simply no one does and there is nowhere to leave things, and people using the pool might mind.

Therefore, there are not many photos in this post 🙁

I have the impression that in general from the entrance to the locker rooms you enter a place where privacy and tranquility are valued. The facilities are surrounded by nets, walls, through which it is impossible to look inside, so this already proves something (of course, there are also "open" pools, which we passed along the way, but they were a different story, especially since they are usually located in total seclusion).

11. Once you decide that enough of this soaking is enough, you should again take thorough shower, naked, of course.

In the end, we are left to enjoy a fresh, warmed and rested body 🙂 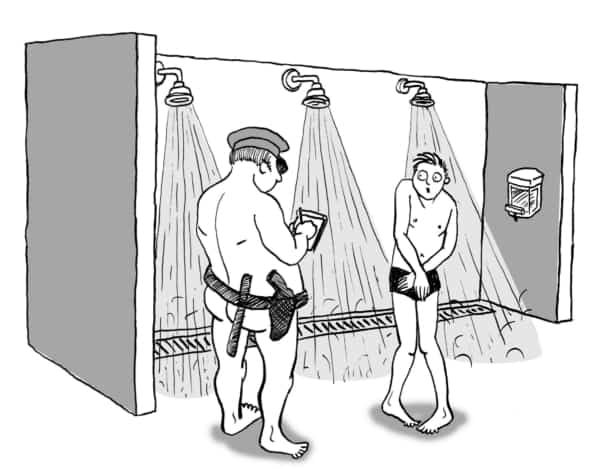 Of course, there are facilities that have different rules, such as Blue Lagoon, so it's always a good idea to look at the pictures by the changing rooms. At Blue Lagoon, people walk everywhere in flip-flops, enter the shower in costumes (even though the instructions say otherwise), and enter the water itself with all their equipment, drinks and food… 🙂

If you have additional questions, please write boldly in the comments!